EXTRA DIRTY is book #2 in the Ruby Steele Mystery, which begins with ON THE ROCKS (Book #1).

Ruby Steele, 30, beautiful, fit, seems just like any other ex-pat hiding out in the Bahamas and playing local bartender. But unruly patrons find out the hard way: Ruby is a mixed-martial-arts pro, and not one you’d want to cross.

A 40-something female tourist seeks out Ruby, desperate for her help. She was out partying all night with her friend, both of them drinking way too much and doing things they don’t want their husbands to know about.

The problem is, as of 12 hours ago, her friend is missing.

She needs Ruby’s help. And she’s running out of time.

Ruby, though, has enough problems of her own. Shadowy figures from her old life are getting close. Way too close.

Can Ruby really pay detective and take on someone else’s problems? Who is this woman, anyway? And what isn’t she telling her?

Ruby can’t keep away from a bad decision.

And this time, it looks like, there won’t be any exception….

Welcome to the Bahamian world of Ruby Steele, replete with her local dive bar, her wily pet monkey, her major drinking problem, her (way) too many fights, her inability to get herself out of trouble, and her fists made of stone. Ruby’s life is a complete wreck. But there’s one thing she’s good at: capturing your heart.

EXTRA DIRTY (A RUBY STEELE MYSTERY) is book #2 in a page-turning mystery/thriller series, one that will linger with you long after the last page is read.

Book #3 (FULL-BODIED) in the series is also available. 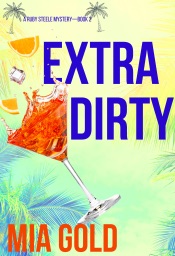