There have been hundreds of books about the girls who ply the oldest trade in the world around the bars and night-spots of Thailand and it is certainly arguable that yet another volume on the subject would be excess to requirements.
However, up until now it is true to say that nobody has ever given the girls and women in question a chance to have their say about the men who come to peruse the neon-lit jungles of the country and pay for their company and the author feels that it is high time somebody did so.
It is undeniable that the vast majority of books written about Thailand’s bar-girls depict them as mercenary, money-grabbing scammers and it would be naïve and perhaps even foolish for anybody to believe that in a large number of cases this is not true. Maybe this is why most of the males who appear in Thai bar-girl literature appear as unfortunate, love-struck nice-guys who didn’t know any better and who did not deserve to be wronged by a cheating schemer, however convincing, sexy and genuine she might have seemed at the time.But there are always two sides to every story.
The fifteen true tales and anecdotes in ‘Thailand bar-girls’ men; Saints & Sinners’ are straight from the seductive lips of the girls who work the bars and streets of Thailand and they show that there are gentleman amongst their customers who are truly gallant as well as rogues whose appalling behavior at times borders on the demonic. Men who have spent any time at all around the night streets of Thailand will be able to identify these character types amongst the stories in this book and some might even recognize themselves. Apart from underlining the fact that there is good and bad in everyone and in all walks of life, the stories in ‘Thailand Bar Girls’ Men; Saints & Sinners’ do not attempt to draw any conclusions as to whether it is the women of Thailand or the foreigners who come to meet them who are right or wrong but simply states the facts in order to allow the reader to make up his or her own mind, although they definitely do offer an insight into why some Thai bar-girls have chosen to become the way they are.

“Jaggs is a rare kind of ex-pat, relishing the atmosphere of Pattaya and its charming women and communicating the romantic ups and downs of the city with a perfectly targeted common touch”
Richard Ravensdale; Pattaya ex-pats club Vice President

“Jaggs has become like a master brewer, skillfully distilling a wealth of living experiences into some very funny moments in Fun City”
Pattaya Trader Magazine 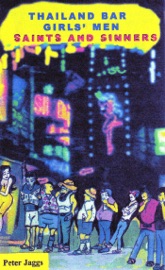