In the late spring of 1950, eleven young immigrants' sons, most of them strangers to each other, came together for the love and fun of a game of soccer. They came from Missouri, Pennsylvania, Massachusetts, and New York, from jobs in canneries, brickyards, post offices, classrooms, and bars, to play for their country in the 1950 World Cup, resulting in what has since been called, by scores of sources for more than forty years, the greatest upset victory in the history of American sports. But no one in America at the time paid attention. Their only public honor--roughly twenty minutes' worth--was from a throng of strangers in a Brazilian mining town.

Geoffrey Douglas's The Game of Their Lives is the story of the lives of these men: their jobs, wives, sweethearts, neighborhoods, the innocence of their era, the anonymity in which they worked and played. It is the story of heroism, stoicism, and simple unsung grace. Of a time before television, endorsement contracts, movie rights for serial killers, and seven-figure idols who denigrate us all. And ultimately--though it is not a sports story--it is the story of a game, played brilliantly. A single game of soccer, the greater game of life. 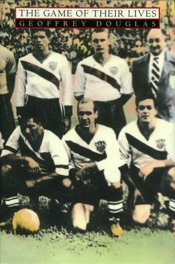